A new, simple, healthy and natural way to present suckling pig. The best Segovia suckling pig filled with Golden Delicious apple. A perfect idea to enjoy this spring at a dinner with friends, a meal with your family, or an evening with your partner.

For this delicious recipe, you will need:

Everything is ready, so…let’s start now!! 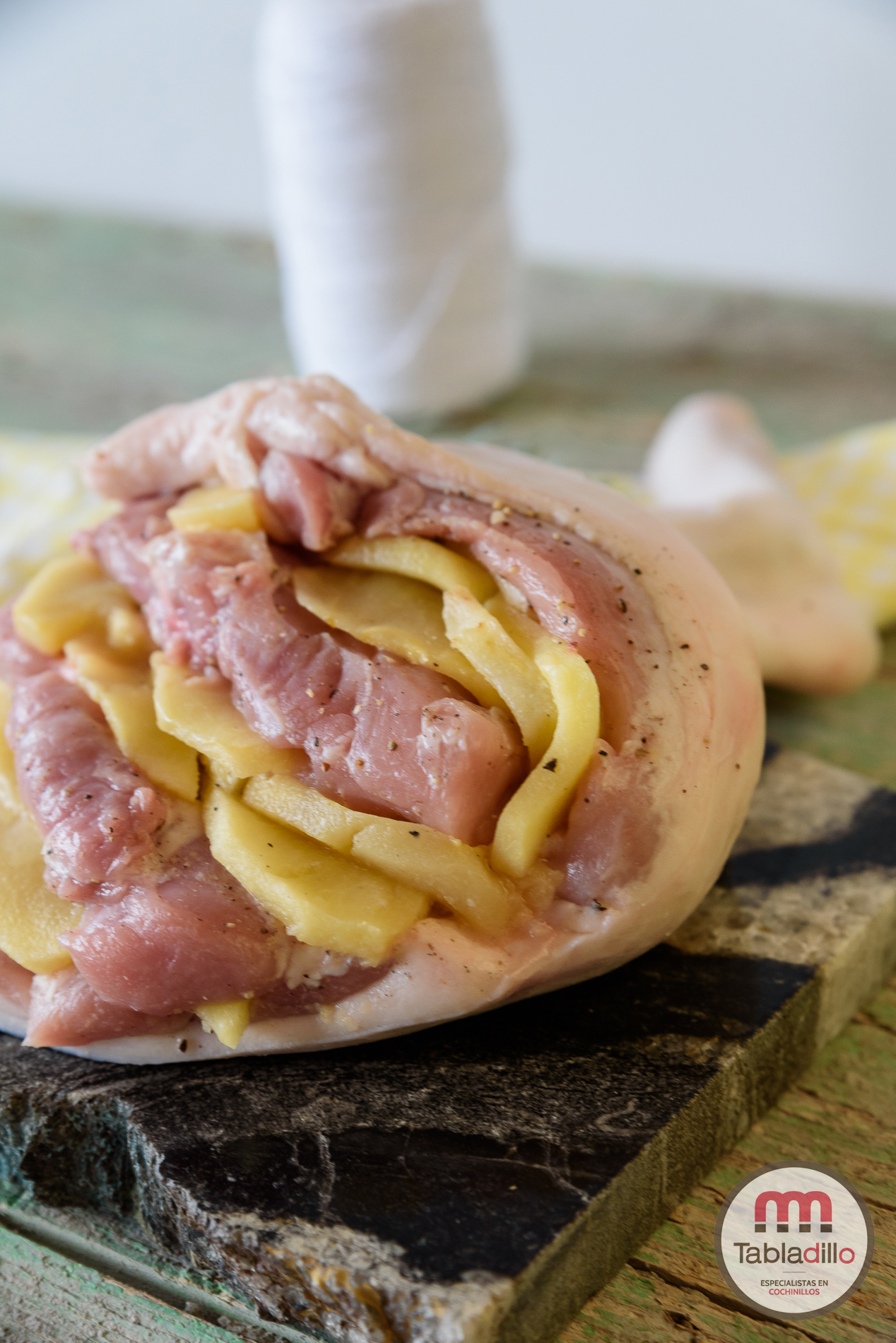 The first thing you should do is to preheat the oven at 160⁰ and, while it gets hot, peel the apples and cut them into thin slices.

With the ham already boned, make cuts in the meat, season with salt and pepper and fill with the apple slices. (Be careful! do not use all slices now, you will need at least half of the six for the sauce. ) Once you have filled it, truss or tie it up with kitchen string, returning it to its original shape.
Put the filled ham in a dish and add a glass of water, some white wine, a cinnamon stick (optional) and a rosemary branch (put only one in, the other will be used for the sauce) and put it in the oven with the skin upwards for one hour and a half.

Now that the ham is already in the oven, it is the time to make the sauce; for this, chop the onions and garlic and fry lightly over a medium heat until the onion is tender. Once it is soft, add the apple slices kept aside (half an apple) and the other rosemary branch. Keep it on the hob until the apple is cooked.

Add salt to taste and white wine. Keep it on the hob until the alcohol evaporates. Once evaporated, remove the rosemary branch and grind it all together.

And now for the final touch, if you have some apple slices left, you can bake them or put them on a grilled skewer as a side dish.

Remove the ham from the oven, remove the string and serve in dishes with a fresh salad. 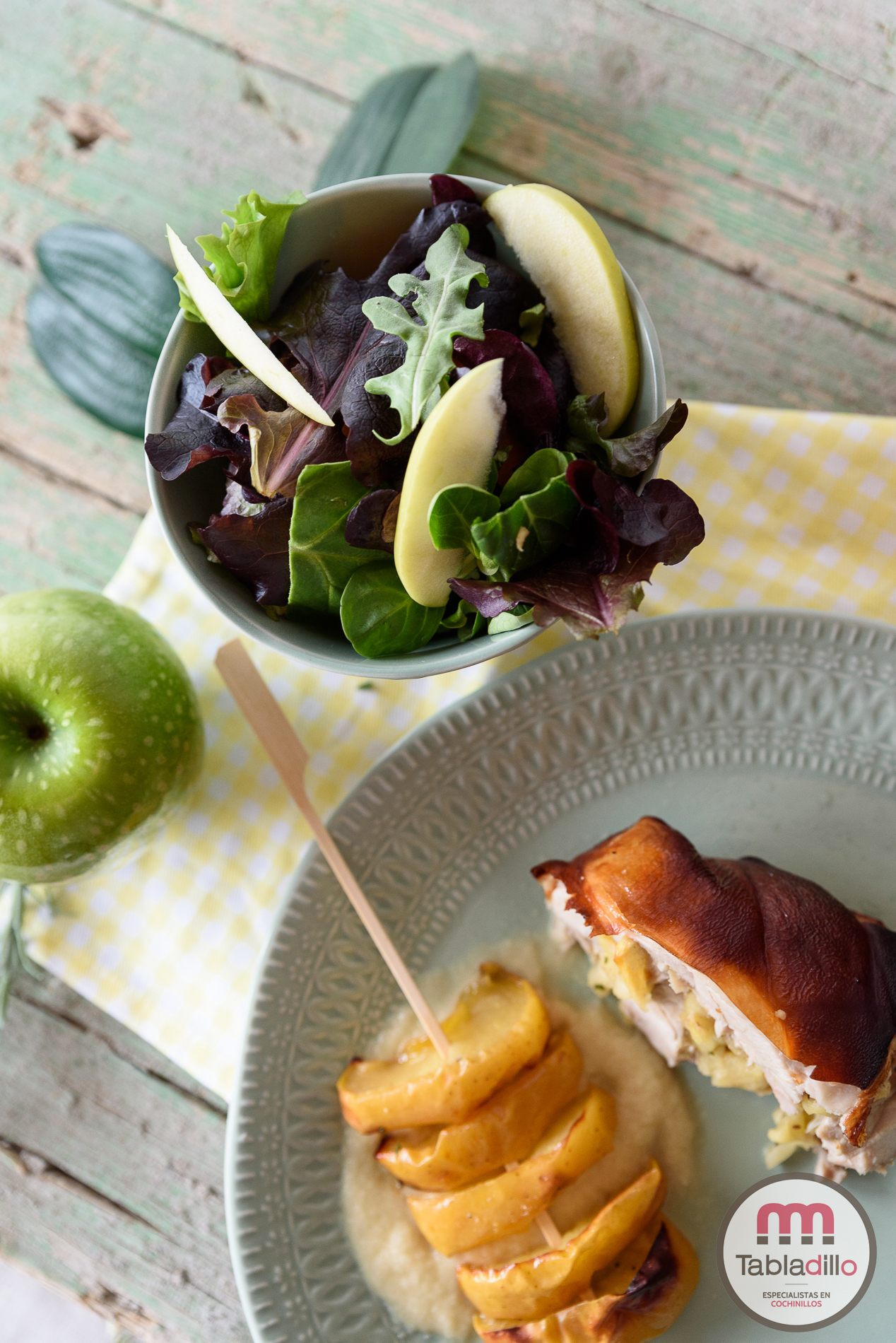 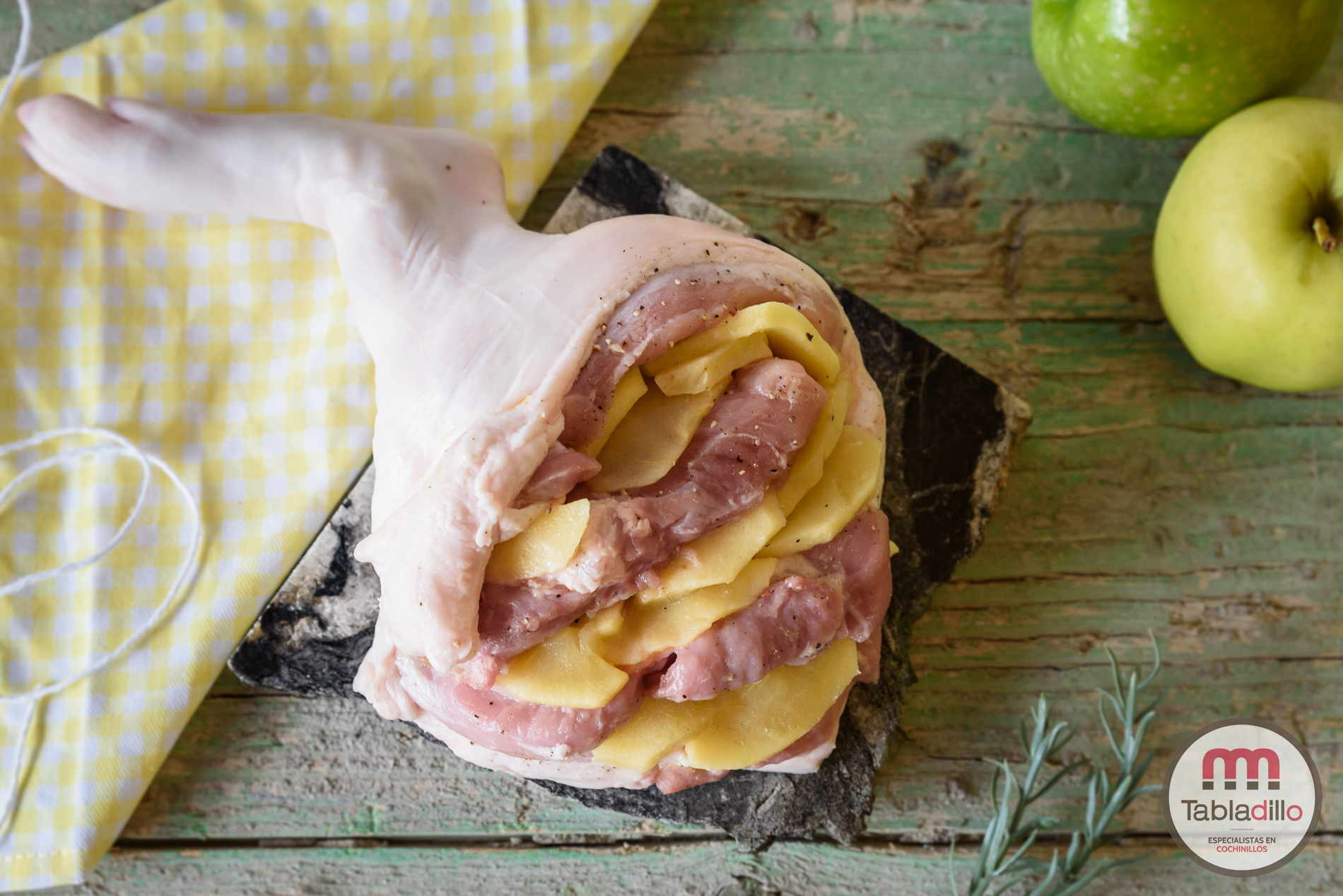 Preheat the oven to 160⁰ C. Meanwhile, peel two of the apples and cut them into thin slices.

When the ham is boned, make some cuts in the meat, season with salt and pepper and fill with the apple slices, keeping some of them for the sauce (about half of one of them). Tie up with kitchen string to return it to its original shape.

Place in a dish with a glass of water and some wine, a cinnamon stick and a rosemary branch. Put it in the oven with the skin upwards for one hour.

To prepare the sauce chop the onion and garlic and fry lightly over a low heat until the onion is tender, add the apple slices set aside and the rosemary branch. Let it cook until the apple is well cooked. Add salt to taste.

Add the white wine and allow the alcohol to evaporate, remove the rosemary branch and grind.

Cut the apple into large pieces and place them in the oven dish together with the ham after the scheduled time. Cook in the oven for another half an hour at 180⁰ C until the skin is browned and crunchy and the apples are well cooked.

Remove from the oven and leave it to stand.

Accompany the ham with the apple slices and the sauce and juice.

No images found!
Try some other hashtag or username